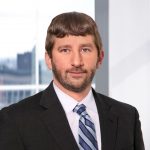 Attorney James Wood successfully obtained summary judgment in favor of a snow plow contractor in a case where a tenant of an apartment building claimed that she had slipped and fallen due to the snow plow contractor’s failure to treat ice on her exterior stairs.

The subject incident arose when the tenant left her second floor apartment in the early morning via an exterior stairway that serviced only her unit.  The tenant alleged that she slipped and fell on black ice, falling down the stairs and suffering a fractured back, and other injuries.  The plaintiff brought a claim for negligence against the snow plow contractor, alleging that the snow plow contractor should have treated the stairway for ice.  The snow plow contractor testified that he did not agree with the landlord to treat the subject stairway – he only had an agreement to plow the parking lot and shovel a path to the mailboxes.  The lease between the tenant and landlord explicitly stated that the responsibility for snow and ice removal of the subject stairway was the tenant’s.

The plaintiff filed a motion for reconsideration, which was denied.